Is consumer spending the problem?

In answer to the question posed in the title to this post, The New York Times's David Leonhardt says absolutely:

"But the real culprit—or at least the main one—has been hiding in plain sight. We are living through a tremendous bust. It isn't simply a housing bust. It's a fizzling of the great consumer bubble that was decades in the making…

"If you're looking for one overarching explanation for the still-terrible job market, it is this great consumer bust."

Tempting story, but is the explanation for "the still-terrible job market" that simple?

First, some perspective on the pace of the current recovery. Though we have grown used to thinking of the rebound from the most recent recession as being spectacularly substandard, that impression (which I share) is driven more by the depth of the downturn than the actual speed of the recovery. The following chart traces the path of real gross domestic product (GDP) from the trough of the last three recessions: In the first two years following the 1990–91 and 2001 recessions, output grew by about 6 percent. Assuming that GDP grew at annual rate of 1.5 percent in the second quarter just ended—a not-unreasonable guess at this point—the economy will have expanded by about 5.3 percent since the end of the last recession in July 2009. That's not a difference that jumps off the page at me.

That difference in the growth of consumption across the early quarters of recovery after the 1990–91 and 2001 recessions with little discernible difference in GDP growth across those episodes illustrates the pitfalls of mechanically focusing on specific categories of spending. In fact, the relatively slower pace of consumer spending in this expansion has in part been compensated by a relatively high pace of business spending on equipment and software: 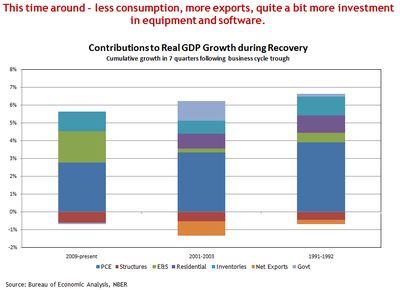 If you throw consumer durables into the general notion of "investment" (investment in this case for home production) the story of this recovery is the relative boom in capital spending compared to recent recoveries: 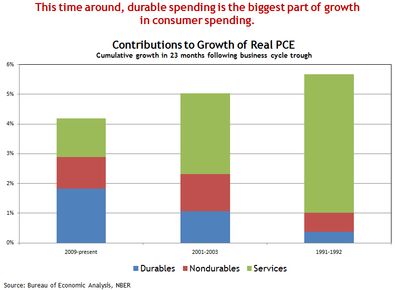 And what about that "still-terrible job market"? You won't get much argument from me about that description, but here again the reality is complicated. Focusing once more on the period since the end of the recession, the pace of job creation is not out of sync in comparison to recent expansions (though job creation after the last two recessions was meager as well, and we are, of course, starting from a much bigger hole in terms of jobs lost): 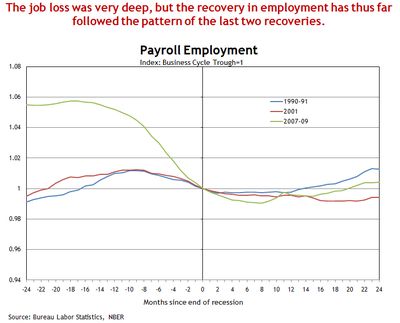 So, relative to recent experience, at this point in the recovery GDP growth and employment growth are about average (if we ignore the size of the recession in both measures). The undeniable (and relevant) human toll aside, the current recovery seems so disappointing because we expect the pace of the recovery to bear some relationship to the depth of the downturn. That expectation, in turn, comes from a view of the world in which potential output proceeds in a more or less linear fashion, up and to the right. But what if that view is wrong and our potential is a sequence of more or less permanent "jumps" up and down, some of which are small and some of which are big?

In addition, investment growth to date has been strong relative to recent recoveries and, as Leonhardt suggests, consumption growth has been somewhat weak. So here's a question: Would we have had more job creation and stronger GDP growth had businesses been more inclined to add workers instead of capital? And if that had occurred, might the consumption numbers have been considerably stronger?

By Dave Altig, senior vice president and research director at the Atlanta Fed