GDPNow's Forecast: Why Did It Spike Recently?

If you felt whipsawed by GDPNow recently, it's understandable. On February 1, the Atlanta Fed's GDPNow model estimate of first-quarter real gross domestic product (GDP) growth surged from 4.2 percent to 5.4 percent (annualized rates) after a manufacturing report

from the Institute for Supply Management. GDPNow's estimate then fell to 4.0 percent on February 2 after the employment report

from the U.S. Bureau of Labor Statistics. GDPNow displayed a similar undulating pattern early in the forecast cycle for fourth-quarter GDP growth.

What accounted for these sawtooth patterns? The answer lies in the treatment of the ISM manufacturing release. To forecast the yet-to-be released monthly GDP source data apart from inventories, GDPNow uses an indicator of growth in economic activity from a statistical model called a dynamic factor model. The factor is estimated from 127 monthly macroeconomic indicators, many of which are used to estimate the Chicago Fed National Activity Index

(CFNAI). Indices like these can be helpful for forecasting macroeconomic data, as demonstrated here

Perhaps not surprisingly, the CFNAI and the GDPNow factor are highly correlated, as the red and blue lines in the chart below indicate. Both indices, which are normalized to have an average of 0 and a standard deviation of 1, are usually lower in recessions than expansions.

A major difference in the indices is how yet-to-be-released values are handled for months in the recent past that have reported values for some, but not all, of the source data. For example, on February 2, January 2018 values had been released for data from the ISM manufacturing and employment reports but not from the industrial production or retail sales reports. The CFNAI is released around the end of each month when about two-thirds of the 85 indicators used to construct it have reported values for the previous month. For the remaining indicators, the Chicago Fed fills in statistical model forecasts for unreported values. In contrast, the GDPNow factor is updated continuously and extended a month after each ISM manufacturing release. On the dates of the ISM releases, around 17 of the 127 indicators GDPNow uses have reported values for the previous month, with six coming from the ISM manufacturing report. 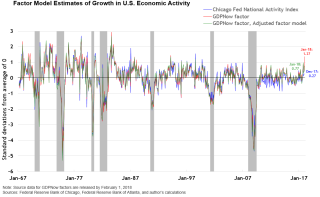 For months with partially missing data, GDPNow updates its factor with an approach similar to the one used in a 2008 paper

by economists Domenico Giannone, Lucrezia Reichlin and David Small. That paper describes a dynamic factor model used to nowcast GDP growth similar to the one that generates the New York Fed's staff nowcast of GDP growth

. In the Atlanta Fed's GDPNow factor model, the last month of ISM manufacturing data have large weights when calculating the terminal factor value right after the ISM report. These ISM weights decrease significantly after the employment report, when about 50 of the indicators have reported values for the last month of data.

In the above figure, we see that the January 2018 GDPNow factor reading was 1.37 after the February 1 ISM release, the strongest reading since 1994 and well above either its forecasted value of 0.42 prior to the ISM release or its estimated value of 0.43 after the February 2 employment release. The aforementioned rise and decline in the GDPNow forecast of first-quarter growth is largely a function of the rise and decline in the January 2018 estimates of the dynamic factor.

Although the January 2018 reading of 59.2 for the composite ISM purchasing managers index (PMI) was higher than any reading from 2005 to 2016, it was little different than either a consensus forecast from professional economists (58.8) or the forecast from a simple model (58.9) that uses the strong reading in December 2017 (59.3). Moreover, it was well above the reading the GDPNow dynamic factor model was expecting (54.5).

A possible shortcoming of the GDPNow factor model is that it does not account for the previous month's forecast errors when forecasting the 127 indicators. For example, the predicted composite ISM PMI reading of 54.4 in December 2017 was nearly 5 points lower than the actual value. For this discussion, let's adjust GDPNow's factor model to account for these forecast errors and consider a forecast evaluation period with revised current vintage data after 1999. Then, the average absolute error of the 85–90 day-ahead adjusted model forecasts of GDP growth after ISM manufacturing releases (1.40 percentage points) is lower than the average absolute forecast error on those same dates for the standard version of GDPNow (1.49 percentage points). Moreover, the forecasts using the adjusted factor model are significantly more accurate than the GDPNow forecasts, according to a standard statistical test

. If we decide to incorporate adjustments to GDPNow's factor model, we will do so at an initial forecast of quarterly GDP growth and note the change here

Most of the difference between the GDPNow and SPF forecasts of GDP growth is the result of inventories. GDPNow anticipates inventories will contribute 1.2 percentage points to first-quarter growth, and the median SPF projection implies an inventory contribution of only 0.4 percentage points. It's not unusual to see some disagreement between these inventory forecasts and it wouldn't be surprising if one—or both—of them turn out to be off the mark.