The fed funds rate has been at the zero lower bound (ZLB) since the end of 2008. To provide a further boost to the economy, the Federal Open Market Committee (FOMC) has embarked on unconventional forms of monetary policy (a mix of forward guidance and large-scale asset purchases). This situation has created a bit of an issue for economic forecasters, who use models that attempt to summarize historical patterns and relationships.

The fed funds rate, which usually varies with economic conditions, has now been stuck at near zero for 20 quarters, damping its historical correlation with economic variables like real gross domestic product (GDP), the unemployment rate, and inflation. As a result, forecasts that stem from these models may not be useful or meaningful even after policy has normalized.

A related issue for forecasters of the ZLB period is how to characterize unconventional monetary policy in a meaningful way inside their models. Attempts to summarize current policy have led some forecasters to create a "virtual" fed funds rate, as originally proposed by Chung et al. and incorporated by us in this macroblog post. This approach uses a conversion factor to translate changes in the Fed's balance sheet into fed funds rate equivalents. However, it admits no role for forward guidance, which is one of the primary tools the FOMC is currently using.

So what's a forecaster to do? Thankfully, Jim Hamilton over at Econbrowser has pointed to a potential patch. However, this solution carries with it a nefarious-sounding moniker—the shadow rate—which calls to mind a treacherous journey deep within the hinterlands of financial economics, fraught with pitfalls and danger.

The shadow rate can be negative at the ZLB; it is estimated using Treasury forward rates out to a 10-year horizon. Fortunately we don't need to take a jaunt into the hinterlands, because the paper's authors, Cynthia Wu and Dora Xia, have made their shadow rate publicly available. In fact, they write that all researchers have to do is "...update their favorite [statistical model] using the shadow rate for the ZLB period."

That's just what we did. We took five of our favorite models (Bayesian vector autoregressions, or BVARs) and spliced in the shadow rate starting in 1Q 2009. The shadow rate is currently hovering around minus 2 percent, suggesting a more accommodative environment than what the effective fed funds rate (stuck around 15 basis points) can deliver. Given the extra policy accommodation, we'd expect to see a bit more growth and a lower unemployment rate when using the shadow rate.

Before showing the average forecasts that come out of our models, we want to point out a few things. First, these are merely statistical forecasts and not the forecast that our boss brings with him to FOMC meetings. Second, there are alternative shadow rates out there. In fact, St. Louis Fed President James Bullard mentioned another one about a year ago based on work by Leo Krippner. At the time, that shadow rate was around minus 5 percent, much further below Wu and Xia's shadow rate (which was around minus 1.2 percent at the end of last year). Considering the disagreement between the two rates, we might want to take these forecasts with a grain of salt.

Caveats aside, we get a somewhat stronger path for real GDP growth and a lower unemployment rate path, consistent with what we'd expect additional stimulus to do. However, our core personal consumption expenditures inflation forecast seems to still be suffering from the dreaded price-puzzle. (We Googled it for you.) 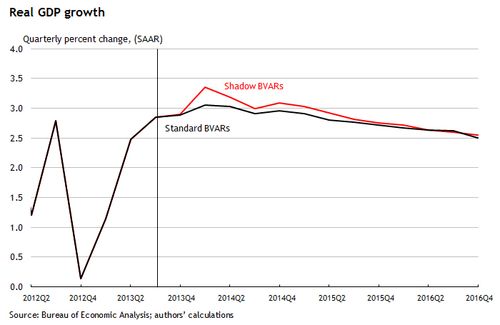 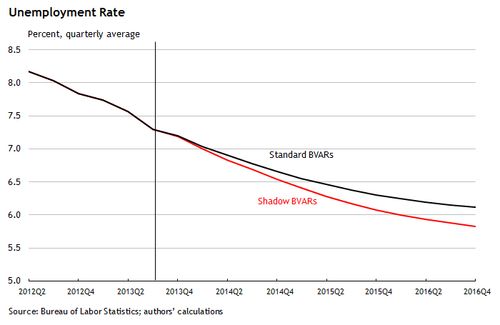 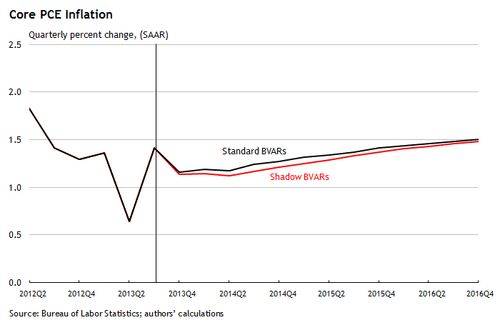 Perhaps more important, the fed funds projections that emerge from this model appear to be much more believable. Rather than calling for an immediate liftoff, as the standard approach does, the average forecast of the shadow rate doesn't turn positive until the second half of 2015. This is similar to the most recent Wall Street Journal poll of economic forecasters, and the September New York Fed survey of primary dealers. The median respondent to that survey expects the first fed funds increase to occur in the third quarter of 2015. The shadow rate forecast has the added benefit of not being at odds with the current threshold-based guidance discussed in today's release of the minutes from the FOMC's October meeting.

Moreover, today's FOMC minutes stated, "modifications to the forward guidance for the federal funds rate could be implemented in the future, either to improve clarity or to add to policy accommodation, perhaps in conjunction with a reduction in the pace of asset purchases as part of a rebalancing of the Committee's tools." In this event, the shadow rate might be a useful scorecard for measuring the total effect of these policy actions.

It seems that if you want to summarize the stance of policy right now, just maybe...the shadow knows.

By Pat Higgins, senior economist, and