The December employment report has come and gone without much of a splash. The roundup of commentary at MarketWatch included these observations:

"In short, not especially strong nor weak. While a 150–170K per month trend in payrolls is far from booming, it is strong enough over time to keep the unemployment rate moving down given slowing in the secular trend in labor force growth. Unemployment was flat in December, but it is down 0.4 points in the last six months."
—Jim O'Sullivan, chief U.S. economist, High Frequency Economics

"The overall picture is that the labor market remains lackluster. If this state of affairs continues throughout most of this year, as we expect, then it is hard to see the Fed dialing back or stopping its [quantitative-easing] purchases as some officials currently envisage."
—Paul Ashworth, chief U.S. economist, Capital Economics

Today's Job Openings and Labor Turnover Survey (JOLTS) report from the U.S. Bureau of Labor Statistics (BLS) did little to change that impression.

The interest in the Fed's reaction, always acute given the employment half of the Fed's dual mandate from Congress, has been heightened since the Federal Open Market Committee (FOMC) announced, first in September, that it will continue its asset-purchase programs as long as "the labor market does not improve substantially." But what constitutes substantial improvement is a matter of some art, as Fed Chairman Ben Bernanke made clear at his press conference following the December meeting:

In assessing the extent of progress, the Committee will be evaluating a range of labor market indicators, including the unemployment rate, payroll employment, hours worked, and labor force participation, among others. Because increases in demand and production are normally precursors to improvements in labor market conditions, we will also be looking carefully at the pace of economic activity more broadly.

A terrific gallery that includes "a range of labor market indicators" is available at the Calculated Risk blog—you might also check out the Cooley-Rupert Economic Snapshot—but here at the Atlanta Fed, we have been experimenting with our own method for summarizing the general state of the labor market. Though this project is very much a work in progress, the idea is to highlight variables that look at employer behavior, signals of employer and employee confidence, measures of labor resource utilization, and leading indicators of labor market conditions.

As a first pass, we've organized a collection of variables we find interesting, grouped in the categories I just described. In the category of employer behavior we include payroll employment (from the BLS's Establishment Payroll Survey, also known as the Current Employment Statistics survey), job vacancies or job openings, and hires (from JOLTS). Variables in the confidence category include hiring plans (from the National Federation of Independent Business's jobs report), job availability (from the Conference Board's Consumer Confidence Survey), and quits (from JOLTS). The utilization group contains unemployment (from the BLS's Current Population Survey, or CPS), marginally attached workers (from the CPS), the job finding rate (defined as the ratio of short-term to long-term unemployed as described in work by University of Chicago professor Rob Shimer), and workers who are part-time for economic reasons (from the CPS). Finally, we capture leading indicators with initial claims for unemployment insurance (from the U.S. Department of Labor), difficulty in filling jobs (from the NFIB small business jobs report), and temporary help services employment (from the CES).

We've based one prototype for how all of this information might be visualized at once on the following "spider chart": Here's how to read this chart: Think of each point on the inner orange circle as representing the value of each of our labor-conditions variables in the fourth quarter of 2009. Point A, therefore, would represent the value of "temporary help services employment" in 2009:IVQ, point B would be "payroll employment" in 2009:IVQ, and so on around the circle. (We've chosen 2009:IVQ as a benchmark because that's the last time we experienced two consecutive quarters of negative employment growth. You can thus think of 2009:IVQ as the quarter just before the beginning of the current "jobs recovery.")

The chart's outer dark-red circle represents the value of each of the labor-conditions variables in the first quarter of 2007—the beginning of the last recession, according to the National Bureau of Economic Research Business Cycle Dating Committee. Moving out from the inner orange circle to outer dark-red circle tracks the progress each variable makes from its value at the end of the recession (i.e. 2009:IVQ) toward its prerecession (i.e. 2007:IVQ) level. For example, being at point C today would mean initial claims for unemployment insurance have fallen by half relative to the amount they increased between 2007:IVQ and 2009:IVQ. ("Improvement," of course, involves lower numbers for bad things, like unemployment and initial claims, and higher numbers for good things, like payroll employment and hires.)

As of the December 2012 employment report, here's where we stand: 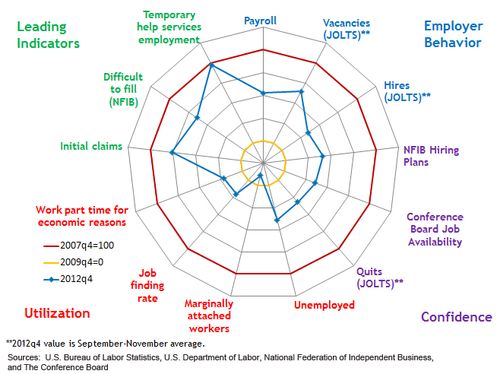 The chart tells a familiar, but not too happy, story. Only one of the variables in the collection of employer behavior, employee and employer confidence, and labor resource utilization categories has recovered even half the gap from its prerecession benchmark. The labor resource utilization variables look particularly bad, with one variable—marginally attached workers—actually getting worse over the recovery as a whole. On the brighter side, our leading-indicator variables are looking relatively strong, perhaps portending improvement ahead.

The interpretation of these spider charts comes with several caveats. First, a variable such as the level of payroll employment will eventually exceed its pre-recession level, and grow consistently over time as the population grows. A variable like "hiring plans"—which is the net percentage of firms in the National Federation of Independent Business survey expecting to hire employees in the next three months—cannot grow without bound. Thus, the charts by construction are about visualizing the transition to some fixed benchmark, not a device for monitoring labor markets over the long run.

Second, it is not obvious that 2007:IVQ levels are necessarily the best benchmarks for all (or even any) of the variables we are monitoring. For example, the demographics associated with the aging of the baby-boom generations have arguably slowed the long-term trend in employment growth, meaning that a return to pre-recession payroll jobs will be slow even in circumstance that we would want to characterize as a "substantially" improving labor market.

Finally, signs of labor market improvement sufficient to alter the pace of FOMC asset purchases may be more about momentum or steady progress than about the return to a specific target or threshold. In fact, this chart depicts signs of such progress over the past three years... 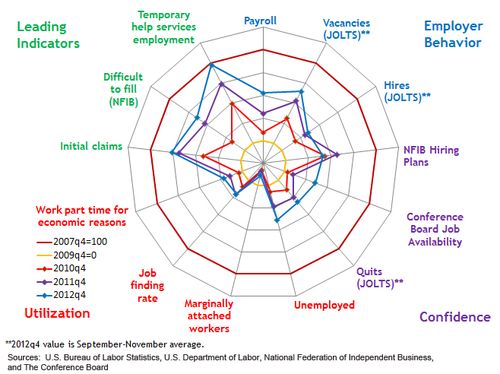 ...but that progress has been very modest in some cases, notably along labor utilization dimensions.

By Dave Altig, executive vice president and research director of the Atlanta Fed