Uncertainty is widely cited as being a significant contributor to the economy's subpar growth. Reddy and Thurm report in yesterday's Wall Street Journal that "half of the nation's 40 biggest publicly traded corporate spenders have announced plans to curtail capital expenditures this year or next," in large measure because of rising economic uncertainty. But how uncertain is the current economic outlook? A few economists have attempted to measure business uncertainty, often by using the degree of disagreement between various forecasts, the volatility of certain economic indicators, or some combination of the two. (Two such approaches can be found here and here.)

We thought we'd use our Business Inflation Expectations (BIE) survey to see if we could gauge the degree of business uncertainty directly. Last week, we asked our panel to assign probabilities to various sales outcomes for their businesses for the coming year. (This methodology is the same one we have been using to measure inflation uncertainty, except in this case our business panel was asked to reveal their expectations for unit sales growth over the year ahead.)

Specifically, we put to our panel the following statement:

Projecting ahead, to the best of your ability, please assign a percent likelihood to the following changes to unit sales over the next 12 months.

Panelists were given the following five unit sales outcomes:

One hundred and ninety-four businesses responded, and here's what they told us: On average, firms expect unit sales growth of about 1.2 percent in the coming year. That's more pessimistic than the real gross domestic product (GDP) forecast of the consensus of economists for the year (about 2 percent). But the range of possible outcomes seemed, to our eyes a least, to be large and unbalanced.

Consider the chart below, which shows the probabilities the panel, on average, assigned to the various sales outcomes. They assigned a 48 percent chance that their unit sales will grow 1 percent or less in the coming year, balanced against only 23 percent likelihood that unit sales will grow more than 3 percent over the next 12 months. In other words, in the minds of our BIE panel, the range of likely sales outcomes over the year ahead is pretty wide, with a fairly weighty chance that unit sales growth may not move in a positive range at all. 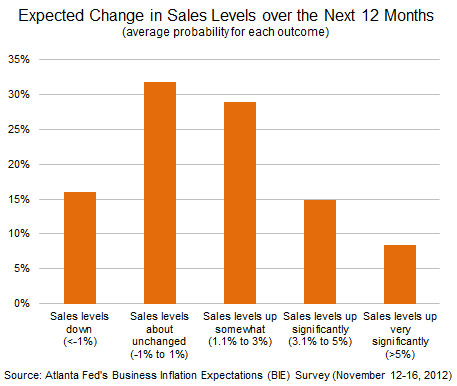 Perhaps we are making a bit too much of the size of the uncertainty businesses are attaching to the outlook. After all, we don't know what uncertainties firms face even in the best of times (since this is the first time we've asked this question). But when we dug into the data a little deeper, we found something else of interest. The degree of economic uncertainty varies widely by firm. Moreover, the greatest uncertainty about the future was held by the panelists who have the most optimistic sales outlook.

Check out the table below. It shows the degree of sales forecast uncertainty on the basis of whether a firm's sales projection is high or low.

Panelists with the most optimistic sales expectations (the 39 firms with the highest sales forecasts) predicted unit sales growth of a little more than 3.5 percent this year, compared with about a 0.5 percent decline in unit sales for the 39 most pessimistic panelists. But also note that those who are relatively optimistic about the coming year have much greater uncertainty about their future than those who are relatively pessimistic—in fact, they're almost twice as uncertain.

What the November BIE survey seems to be saying is that it isn't just that an uncertain business outlook is reining in our growth prospects, but that the outlook is especially uncertain for the firms that think they have the best opportunity for expansion. Apparently, those wearing rose-colored glasses are having trouble seeing through them.

Nicholas Parker, economic research analyst, all with the Atlanta Fed