The ongoing tug of war between credit supply and demand issues facing small businesses is captured in this piece in the American Prospect by Merrill Goozner. Goozner asks whether small businesses are facing a tougher borrowing environment than is warranted by current economic conditions. One of the potential factors identified in the article is the relative decline in the number of community banks—down some 1,124 (or 13 percent of all banks from 2007). Community banks have traditionally been viewed as an important source of local financing for businesses and are often thought to be better able to serve the needs of small businesses than large national banks because of their more intimate knowledge of the business and the local community.

The Atlanta Fed's poll of small business can shed some light on this issue. In April we reached out to small businesses across the Sixth Federal Reserve District to ask about financing applications, how satisfied firms were that their financing needs were being met, and general business conditions. About one third of the 419 survey participants applied for credit in the first quarter of 2012, submitting between two and three applications for credit on average. As we've seen in past surveys (the last survey was in October 2011), the most common place to apply for credit was at a bank.

For the April 2012 survey, the table below shows the average success of firms applying to various financing sources (on a scale of 1 to 4, with 1 meaning none of the amount requested in the application was obtained, and 4 meaning that the firm received the full amount applied for). The table also shows the median age of businesses applying for each type of financing. 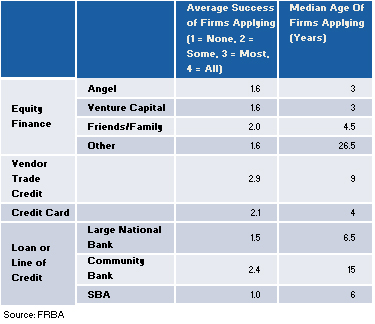 The results in the table show that for credit applications, Small Business Administration loan requests and applications for loans/lines of credit from large national banks tended to be the least successful, whereas applications for vendor trade credit and commercial loans/line-of-credit from community banks had the highest average success rating.

Notably, firms applying for credit at large national banks were typically much younger than firms applying at regional or community banks. If younger firms generally have more difficulty in getting credit regardless of where they apply, it could explain why we saw less success, on average, among firms applying at larger banks.

To investigate this issue, we compared the average application success among young firms (less than six years old) that applied at both regional or community banks and at large national banks, pooling the responses from the last few years of our survey. The credit quality of borrowers is controlled for by looking only at firms that applied at both types of institutions. What we found was no significant difference in the average borrowing success of young firms applying for credit across bank type—it just does seem to be tougher to get your credit needs met at a bank if you're running a young business. Interestingly, we also found that more mature firms were significantly more successful when applying at regional or community banks than at large national banks—it seems to be relatively easier for an established small business to obtain requested credit from a small bank.

While this analysis did not control for other factors that could also affect the likelihood of borrowing success, the results do suggest that Goozner's question about the impact of declining community bank numbers on small business lending is relevant. If small businesses are generally more successful when seeking credit from a small bank, will an ongoing reduction in the number of community banks substantially affect the ability of (mature) small businesses to get credit? More detailed insights from the April 2012 Small Business Credit Survey will be available soon on our Small Business Focus website, and we will provide an update when they are posted.