Last week, we found ourselves in conversation with some colleagues discussing the issue of state and local fiscal conditions, which by pure coincidence coincided with the announcement that the city of Harrisburg, Pa., filed for bankruptcy. In the course of conversation, our attention was drawn to an interesting fact. Prior to 2000, according to U.S. Census Bureau data through 2008, annual growth of total revenues at the state and local level was closely aligned with direct expenditures at the same level. Since 2000, however, this pattern has decidedly changed. The main reason is the dramatic volatility of total revenue: Revenues at the state and local level come from many sources. Taxes from income, sales, and property, of course, but also from various fees and charges associated from education, utilities, ports and airports, and so on. In addition, revenues come from transfers from the federal government and, importantly, asset income from trust fund portfolios.

In fact, the primary source of the increased volatility in state and local government revenues since 2000 is large swings in revenue going into insurance trust funds to finance compulsory or voluntary social insurance programs operated by the public sector. 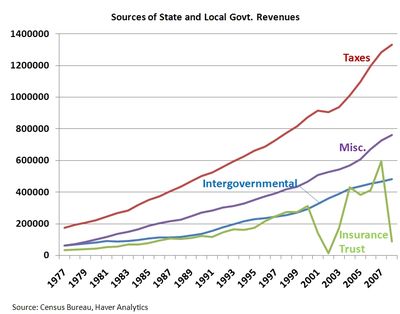 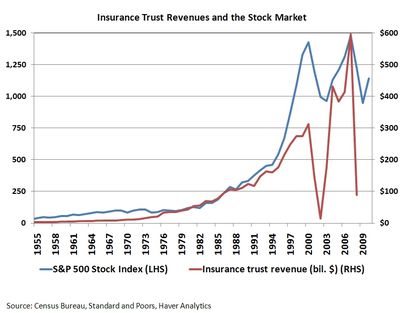 In research that focuses specifically on revenue variability at the state level, UCLA law professor Kirk Stark notes the possibility that state revenues have too much reliance on the same income-centric tax base that characterizes the federal revenue code:

"Perhaps the most obvious (yet little discussed) federal inducement for the design of state and local tax systems is the fact that Congress has established an elaborate and detailed legal framework for certain taxes—including, most notably, the individual and corporate income taxes—but not for others. The very existence of the Code, Treasury Regulations, IRS administrative guidance, and federal judicial case law creates an almost irresistible incentive for the states to adopt individual and corporate income taxes. The availability of the federal income tax base as a starting point in calculating state tax liability is an unqualified benefit. …

"At the same time, however, there are potentially significant costs associated with having states piggyback on the federal income tax. Taxes that might be suitable for use by a central level of government are not necessarily appropriate for use by state or local governments. Some of the most volatile state revenue sources are those upon which states rely by virtue of piggybacking on the federal income tax."

The theme of Professor Stark's article is the role that federal policy might play in generating revenue volatility at the state level:

"Through various inducements and limitations embedded in federal law, the federal government has stacked the deck in favor of state revenue volatility, unwittingly exacerbating the subnational fiscal crises that it is then called upon to mitigate through bailouts and general fiscal relief."

Some other examples of how federal tax policy can have an impact on state and local policy according to Stark include "differential treatment of alternative tax sources within the federal income tax deduction for state and local taxes" and "various specific provisions in federal law that limit state taxing authority."
Professor Stark is clear on the point that the research in this area has defied simple generic conclusions about how state and local tax codes can be constructed to minimize revenue volatility. And the work is largely silent on how the volatility question fits into the broader question of optimal tax-system design. But it is hard to argue with this conclusion:

"If the federal government is interested in reducing the likelihood and severity of future state fiscal crises, it should consider changes to federal law that would eliminate the current bias in favor of volatile state tax systems."

By Dave Altig, senior vice president and research director at the Atlanta Fed