The pull between spending and saving

In a speech on Wednesday, Atlanta Fed President Dennis Lockhart talked about how the economic outlook is being shaped by the process of deleveraging (reducing debt and increasing saving) that is occurring in the economy.

By way of background, President Lockhart emphasized the important role that some amount of debt plays in economic growth: while difficult to measure precisely, research suggests that debt levels that get high enough are associated with extended periods of subpar economic growth.

"Debt is not in and of itself a bad thing. Debt supports economic growth by allowing households, businesses, and governments to smooth their spending and investment over time. Borrowing and lending can help facilitate the allocation of capital to productive uses in the economy. But high debt levels can also result in lower economic growth, a point that Stephen Cecchetti, of the Bank for International Settlements, made in a paper presented at the Kansas City Fed's symposium in Jackson Hole, Wyo., last week."

Relative to the 1990s, the last decade witnessed a surge in borrowing by the nonfinancial sector (comprising households, nonfinancial businesses and governments). Indeed, as President Lockhart noted:

"Relative to the size of the U.S. economy measured in terms of GDP, the total domestic debt of nonfinancial sectors of the economy reached 248 percent in 2009, increasing by almost 75 percentage points over the previous decade alone."

While no longer growing, the overall debt position of the nonfinancial sector has barely declined since peaking in 2009. How did we get to this point? Much of the increase in total debt during the 2000s was in the form of real estate debt, and most of that was by households and unincorporated businesses (mostly sole proprietorships and partnerships). During the 1990s the mortgage debt of households was relatively stable at around 45 percent of GDP, but it increased to a peak of 76 percent of GDP in 2009. Over the same period, mortgage debt for unincorporated businesses increased from around 12 percent of GDP to almost 20 percent. 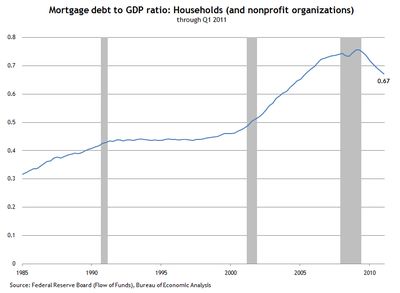 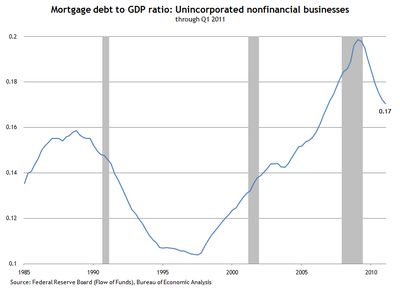 Because real estate is relatively expensive, it is not surprising that mortgage debt heavily influences the overall debt burden of individuals. Rapidly rising home values from the late 1990s to 2006 supported the notion that housing was a good asset to purchase…until it wasn't. According to the S&P Case-Shiller national home price index, home values have declined by more than 30 percent from their peak in 2006, after having increased by more than 150 percent compared with the previous decade. 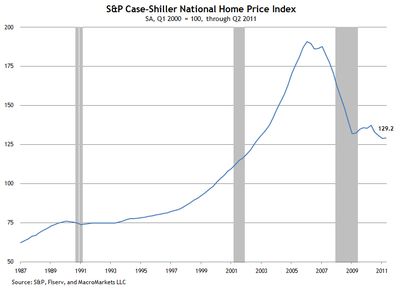 From their peak in 2009, debt levels for households and unincorporated businesses have declined relative to GDP notably by a combined 15 percentage points. Reduced mortgage debt accounted for three quarters of that decline. As President Lockhart notes, repairing the balance sheet of the household sector, just as it does for businesses, can occur through some combination of debt reduction and increased savings.

"Household deleveraging has occurred mostly through a combination of increased savings, debt repayment, and also debt forgiveness. At the same time, there has generally been less access to credit for households as a result of stricter underwriting standards. The inability to qualify for home equity loans and other forms of credit has slowed the pace at which new debt is taken on by households replacing paid-down debt. The effect is to reduce their debt burden over time."

If individuals are aggressively reducing their debt burden, and corporations haven't increased their overall borrowing, why hasn't the overall debt burden of the nonfinancial sector of the economy declined since 2009? The primary reason is that the amount of federal government debt has increased sharply in recent years—from 35 percent of GDP in 2007 to about 65 percent of GDP in early 2011. 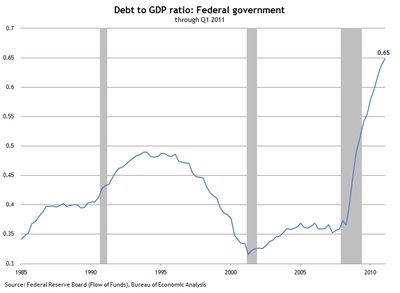 "While the private sector—households and businesses—has made notable progress in lowering its debt burden, discussions of how to reduce public debt have only just begun. The government still needs to introduce major policy changes to put public debt on a sustainable path. Demographic trends, which I referenced earlier, will make public debt reduction even more challenging."

How long will the deleveraging process take to play out? I'm pretty confident that nobody really knows precisely, but President Lockhart suggests that we may be closer to the beginning of the process than the end:

"Rebalancing simply takes time. A 2010 report by McKinsey surveyed 32 international periods of deleveraging following financial crises and found that, on average, the duration of these episodes was about six and a half years. U.S. debt to GDP peaked in the first quarter of 2009. So, by that standard we are much closer to the beginning than the end of our deleveraging process."

Lockhart also makes the point that this necessary structural adjustment has consequences for the medium-term outlook:

"When economies are deleveraging they cannot grow as rapidly as they might otherwise. It is obvious as consumers reduce spending they divert more of their incomes to paying off debt. This shift in consumer behavior increases the amount of capital available for financing investment. But higher rates of business investment are not likely to fully offset weakness in consumer spending for some time, as businesses continue to grapple with uncertainties about the future."

From a monetary policy perspective, slower growth as a result of deleveraging raises important challenges:

"To my mind, it's becoming increasingly clear the challenge we policymakers face is balancing appropriate policy responses for the near to medium term with what's needed for the longer term. In other words, we must continue to help the economy achieve a healthy enough cyclical recovery, especially with unemployment high and consumer spending lackluster. At the same time, we must recognize the longer-term need for directionally opposite structural adjustments, including deleveraging."

How does President Lockhart size up the role of monetary policy in this context?

"Given the weak data we've seen recently and considering the rising concern about chronic slow growth or worse, I don't think any policy option can be ruled out at the moment. However, it is important that monetary policy not be seen as a panacea. The kinds of structural adjustments I've been discussing today take time, and I am acutely aware that pushing beyond what monetary policy can plausibly deliver runs the risk of creating new distortions and imbalances.

"We may find, as economic circumstances evolve, that policy adjustments are required. In more adverse scenarios, further policy accommodation might be called for. But as of today, I am comfortable with the current stance of policy, especially considering the tensions policy must navigate between the short and long term and between recovery and the need for longer-term structural adjustments."