The December meeting of the Federal Open Market Committee (FOMC), as summarized in the minutes published last week, debated the context for tapering the quantitative easing (QE) program of asset purchases and adjusting the FOMC’s forward guidance on the federal funds rate. One of the issues debated was postrecession progress in the labor market. For example, participants struggled with the reasons for the large drop in labor force participation in recent years:

Some participants cited research that found that demographic and other structural factors, particularly rising retirements by older workers, accounted for much of the recent decline in participation. However, several others continued to see important elements of cyclical weakness in the low labor force participation rate and cited other indicators of considerable slack in the labor market, including the still-high levels of long-duration unemployment and of workers employed part time for economic reasons and the still-depressed ratio of employment to population for workers ages 25 to 54. In addition, although a couple of participants had heard reports of labor shortages, particularly for workers with specialized skills, most measures of wages had not accelerated. A few participants noted the risk that the persistent weakness in labor force participation and low rates of productivity growth might indicate lasting structural economic damage from the financial crisis and ensuing recession.

In a speech on Monday, Atlanta Fed President Dennis Lockhart emphasized similar concerns. He posed the question of whether the improvement in the unemployment rate since the end of the recession, now having recovered about 65 percent of its 2007–09 increase, is overstating the actual progress in the utilization of the nation’s labor resources. President Lockhart observes:

The labor force participation rate has fallen from 65.8 percent of the population at the end of 2008 to 62.8 percent in December 2013. On this, President Lockhart notes:

Some of the decline in labor force participation since 2009 is due to the baby boomers retiring, but even among prime-age workers—those aged 25 to 54—the participation rate is down significantly [2.1 percentage points]. This suggests that other factors, such as low prospects of finding a job, are playing a role.

To examine this possibility, we can look at the sum of marginally attached workers. These are people who say they are willing to work and have looked for work recently but are not currently looking.

It’s accurate to say the country has a large number of people in the so-called “shadow labor force.”

Because the sharp decline in labor force participation is not fully understood, and because the unemployment rate decline conflates declines in participation with employment gains, President Lockhart suggests it is useful to also look at the share of the prime-age population that is employed. Between the end of 2007 and 2009 the employment-to-population rate for this group declined from 79.7 to 74.8 percent. Since 2009, employment gains for the core of the workforce have advanced only 27 percent toward the prerecession peak (for the entire population over age 16, the recovery is essentially zero). Variations on this theme can be seen here and here.

Usually, the employment to population rate and the unemployment rate move in lock step (because labor force movements are very gradual). But that has not been the case during this recovery.

In addition to unemployment, President Lockhart highlights the issue of underemployment:

Many Americans are working fewer hours than they would prefer because their employers are offering them only part-time work. The share of workers who are involuntarily working part-time doubled during the recession and has moved only about 30 percent lower since the recovery began.

So, on the question of whether the unemployment rate decline has overstated actual progress in labor utilization, Lockhart says yes:

The Atlanta Fed has been featuring the labor market spider chart tool on its website as a way to track relative progress in a number of labor market indicators since the end of the recession. For the purposes of President Lockhart’s speech, the relative improvement in various indicators of the rate of labor utilization was presented graphically in the form of yardage gains from the goal-line of a football field. The changes can be seen here (the data are from the U.S. Bureau of Labor Statistics and Atlanta Fed calculations). The idea is that the labor utilization “team” was driven back to its own goal line from the end of 2007 through the end of 2009, and the graphic shows how many yards (percent) the team has recovered as of the January 10 labor report. (The use of a football field image is perhaps appropriate, given that the recent BCS championship game featured two teams from the Sixth District.)

President Lockhart also suggests a link between labor market slack and the weak pricing trends we have experienced in recent years:

It’s worth noting that wage and salary income growth remains weak. I hear very little from business contacts about upward wage pressures except in a few specialized job categories. Wage pressures usually accompany growing demand and rising inflation but, although demand appears to be growing, inflation is very soft. 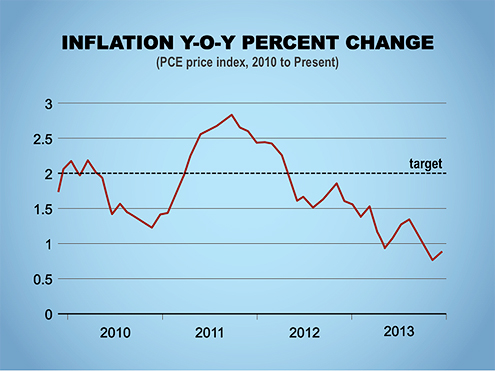 In fact, looking at the recent disinflation apparent in virtually all consumer price statistics relative to the FOMC’s longer-run objective, President Lockhart acknowledges the risk of an inflation “safety”:

...I think inflation will stabilize and begin to move back in the direction of the FOMC’s 2 percent objective as the economy gathers momentum. So I’m interpreting the soft inflation numbers as a risk signal. Through the lens of prices, the economy could be weaker than we currently believe.

By John Robertson, a vice president and senior economist in the Atlanta Fed’s research department